A Peripherally Inserted Central Catheter or PICC line is a long, thin, flexible tube used for administering intravenous fluids and medication.  A PICC line is usually inserted in a vein in your upper arm, above your elbow and the tip is advance to a position that is just above the heart. Which arm is used depends on your particular situation, but usually the nondominant arm is used.

The catheter is inserted by specially trained nurses using ultrasound guidance as a sterile procedure. This means precautions will be taken to make sure that germs are not inserted with the catheter.  Similar care should be taken with all further catheter-related procedures.

A PICC line may have one or two channels, known as single or double lumens.  This allows different treatments to be given at the same time.  The catheter tail (end of the tube outside the body) has a special cap or bung that can be attached to a drip or syringe. Sometimes a clamp may be attached to keep the line closed when it is not in use.

You can go home with a PICC line in place, and it can be left in for a number of weeks or even months.  A PICC line is helpful if doctors and nurses find it difficult to get needles into you veins or if the walls of your veins have hardened from previous chemotherapy treatment.

PICC lines are used for a variety of treatments, such as: 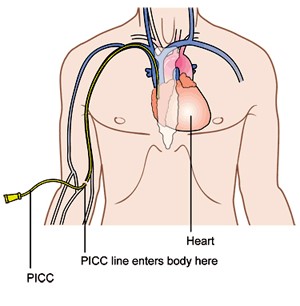 The procedure to insert the PICC line takes about an hour and can be done as an outpatient procedure. It’s usually done in a procedure room that’s equipped with imaging technology, such as X-ray machines, to help guide the procedure.

Ultrasound is used to locate the vein in the arm. You will be awake during the procedure but your arm will be numbed with local anaesthetic before the PICC line is introduced. You should not feel pain at the entry site but there may still be some non-painful sensations such as pressure.  X-ray images are taken to check the position of the PICC line.

After inserting the PICC line and the procedure is complete, the catheter is secured with a dressing on your arm to ensure it remains in place and does not move.  The sterile dressing also protects the site from infection.  The PICC line can be used immediately following placement.

After a PICC line insertion, there may be some tenderness in the area where the catheter enters your arm. It should go away within a few days.

Your PICC line can be removed when your treatment ends. To remove the line, a doctor or nurse gently pulls on the end of the catheter to remove it from your arm.  PICC line removal reduces your risk of complications, such as infection. But if there’s a chance you may need a PICC line again, your doctor may recommend keeping it in place. That’s because repeatedly placing the PICC line increases the risk of damage to your veins.

Your doctor will discuss the specific risks and potential benefits of the procedure with you.
Some of the possible risks include:

TACE is a minimally invasive procedure which places chemotherapy and synthetic materials called embolic agents into a blood vessel feeding a cancerous tumour to cut off the tumour’s blood supply and trap the chemotherapy within the tumour. It is most often used to treat liver cancer but may also be used in patients whose cancer has spread to other areas of the body. Depending on the number and type of tumours, TACE may be used as the sole treatment or in combination with surgery, ablation, chemotherapy or radiation therapy.

TACE is most beneficial to patients whose disease is predominately limited to the liver, whether the tumour began in the liver or spread to the liver (metastasized) from another organ.

Cancers that may be treated by TACE include:

How does the procedure work?

TACE attacks the cancer in two ways. First, it delivers a very high concentration of chemotherapy, or anti-cancer drugs, directly into the tumour, without exposing the entire body to the effects of those drugs. Second, the procedure cuts off blood supply to the tumour, trapping the anti-cancer drugs at the site and depriving the tumour of the oxygen and nutrients it needs to grow.

Chemotherapy drugs injected into the hepatic artery reach the tumour directly, sparing most of the healthy liver tissue. Then, when the artery is blocked, the blood is no longer supplied to the tumour, while the liver continues to be supplied by blood from the portal vein. This also permits a higher concentration of the anti-cancer drugs to be in contact with the tumour for a longer period of time.

How is the procedure performed?

Image-guided, minimally invasive procedures such as TACE are performed by a specially trained interventional radiologist in a specialised x-ray suite.

Additional x-rays will be taken to confirm that the entire tumour has been treated.

When the procedure is complete, the catheter is removed and pressure is applied to stop any bleeding. Sometimes, your doctor may use a closure device to seal the small hole in the artery. This will allow you to move around more quickly. 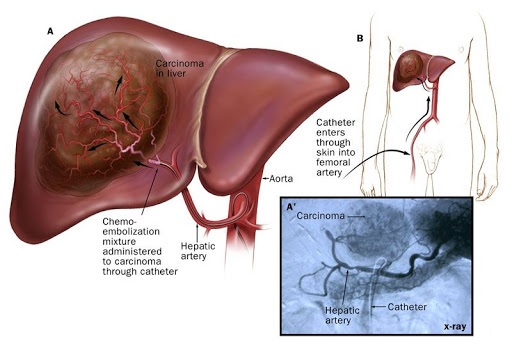 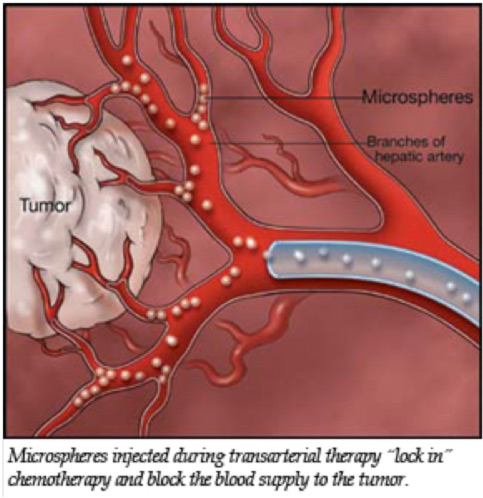 Side effects can happen with any type of treatment for liver cancer, but everyone’s experience is different. Some people have many side effects. Other people have few or none at all.

TACE may cause side effects because it can damage healthy cells as it kills cancer cells. Side effects can develop any time during, immediately after or a few days or weeks after chemotherapy. Most side effects go away on their own or can be treated, but some side effects may last a long time or become permanent.

Because TACE is a local treatment given to the liver, there are fewer side effects from the chemotherapy drugs than if they are given as a systemic therapy. Side effects will depend mainly on the number of tumours being treated, the amount of scarring in the liver (called cirrhosis) and your overall health.

Most patients experience some side effects called post-embolization syndrome, including pain, nausea, vomiting and fever. Pain is the most common side effect that occurs because the blood supply to the treated area is cut off. It can readily be controlled by medications given by mouth or your IV.

You should be able to leave the hospital within 48 hours after the procedure, once your pain and nausea have subsided.

It is normal for you to run a fever up to a week following the procedure. Fatigue and loss of appetite are also common and may last two weeks or longer. In general, these are all signs of a normal recuperation.

If your pain suddenly changes in degree or character, if your fever becomes suddenly higher or you notice any other unusual changes, you should contact your physician.

What are the Benefits vs. Risks?

What are the limitations of TACE?

TACE is not recommended in cases of severe liver or kidney dysfunction, abnormal blood clotting, prior surgery or stenting of the bile duct, or a blockage of the bile ducts. In some cases—despite liver dysfunction—TACE may be done in small amounts and in several procedures to try and minimize the effect on the normal liver.

TACE is a treatment, not a cure. Approximately 70 percent of the patients will see improvement in the liver and, depending on the type of liver cancer, it may improve survival rates and quality of life.