Many arrhythmias are harmless.  However, if they are highly irregular or result from a weak or damaged heart, arrhythmias can cause severe symptoms and complications. 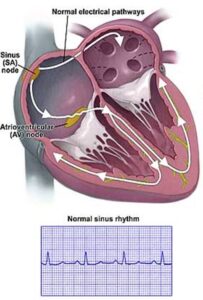 The most common kind of abnormal heart rhythm condition is atrial fibrillation (AF), which causes an irregular and often fast, heart rhythm.  The upper chambers of the heart, or atria, may beat as often as 400 times a minute, about 4 times faster than normal.  Although it is not life threatening AFib can lead to palpitations,fatigue and heart failure. 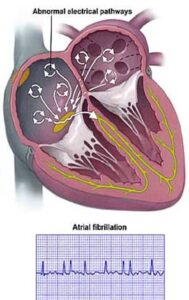 For more information go to:    https://www.heartfoundation.org.nz/your-heart/heart-conditions/atrial-fibrillation

These depend on the type and severity of the arrhythmia.  In some cases no treatment is necessary.  Treatment options include medications, lifestyle changes, invasive therapies, electrical devices or surgery.

A variety of drugs are available to treat arrhythmias.  Because everyone is different, it may take trials of several medications and doses to find the one that works best for you.  Several types of drugs are used:

Cardioversion is a procedure which converts an abnormally fast heart rate or cardiac arrhythmia, to a normal rhythm by using electricity or drugs. We usually use synchronised electrical cardioversion to deliver a small electric shock to jolt the heart back into a normal rhythm.  This is often used to treat AFib.   If the arrhythmia has been present for more than 48 hours, the patient will usually be treated with anticoagulant medication, such as Warfarin, for at least 3 weeks prior to the cardioversion. This ensures that there is no blood clot in the heart which could be released into the blood stream by the cardioversion causing problems such as a stroke.  A transoesophageal echo, TOE, may be performed immediately prior to the cardioversion to exclude the presence of a blood clot within the heart.

The procedure is under a short general anaesthetic, so it is important not to have anything to eat or drink for 4 to 6 hours before the procedure. The shock is delivered through electrode pads placed on the chest and the back.  As many a 3 shocks may be given in an attempt to restore the heart to a normal rhythm.   Usual medications are stopped on the morning of the procedure, unless directed by the cardiologist.

After the cardioversion the patient is monitored for 1 hour, and should not drive for 24 hours.  A report will be sent to the referring doctor or GP.  The doctor performing the procedure will explain ongoing treatment and medication .  If the patient has been on Warfarin, it is important to continue this, usually for at least 3 weeks after the cardioversion.

This is a diagnostic test to assess your hearts electrical conduction system or activity.  These studies are performed to understand and diagnose an abnormal heart rhythm.  This is done by placing catheters up through the groin into the heart, and checking and testing the electrical activity.  Once the source of the arrhythmia is confirmed, the Doctor will decide whether catheter ablation can treat the problem and if it is safe to do so.

During an ablation, energy is delivered through a catheter to a small area of tissue inside the heart causing the arrhythmia.  This energy “disconnects” the pathway of the abnormal rhythm.

Catheter ablation is used to treat rapid heartbeats that begin in the upper chambers, or atria, of the heart.  As a group, these are know as supraventricular tachycardias, or SVTs.  Types of SVTs are:

Catheter ablation can also treat heart rhythm disorders that begin in the heart’s lower chambers, (ventricles), such as ventricular tachycardia (VT), which can be a life-threatening arrhythmia.

Refer to the following link for more information: Ablation of Supraventricular Tachycardia 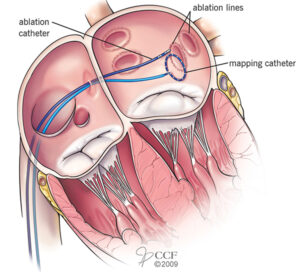 Refer to the following link for more information:

Normally the heart is signaled to contract by an electrical impulse  that starts in the sinus node at the top the of right atrium (top chamber of the heart).  This impulse travels through the hearts electrical system, “wires” to the muscles of the lower chambers of the heart (the ventricles), telling them to contract and cause a heartbeat.  This natural system helps the heart pump in a regular (sinus), rhythm.  A problem with any part of this system can cause a slow heart rate.  In this case an artificial pacemaker may be needed to take over the job of the hearts own electrical system and prevent the slow heart rate.

A permanent pacemaker is a device that is implanted into the body just below the collarbone.  They only weigh about 30grams and measure 3-4 cm across.  They contain a computer with memory and electrical circuits, a powerful battery (generator) and special wires called leads.  The generator creates electrical impulses that are carried by the leads to the heart muscle, signaling it to pump.

The insertion procedure usually takes around an hour and does not require a general anaesthetic or open-heart surgery, only local anaesthetic.  The generator is implanted into a pocket made under the skin.  The leads are placed into a vein near the collarbone, and fed down into the heart using X-ray guidance.  One end of the leads touch the heart muscle and the other end is connected to the pacemaker generator.  The pacemaker is then programmed to send signals to the heart to ensure the correct heart rhythm.  The pacemaker is monitored regularly to make sure it is working properly and the settings can be changed at any time if necessary.  The battery life of the generator lasts 5-10 years and must be replaced when it is due to run out.  This procedure is very similar to the pacemaker insertion procedure.   The outer casing of pacemakers is designed so that it will rarely be rejected by the body’s immune system. It is usually made of titanium, which is inert within the body.

Placement of a pacemaker must be checked by X-ray and a pacing check must be done prior to discharge. 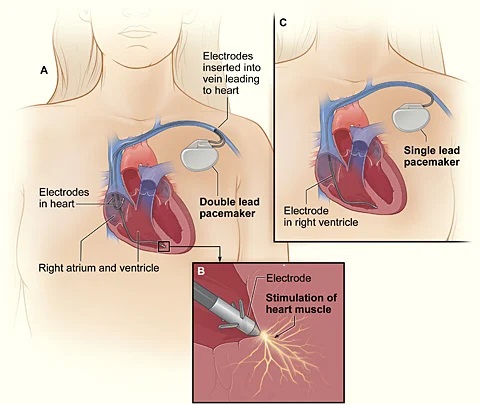 When are Pacemakers Used

Pacemakers may be prescribed for a number conditions, including:

An implantable loop recorder is a type of heart-monitoring device that records your heart rhythm continuously for up to three years. It records the electrical signals of your heart and allows remote monitoring.  They are very small devices that are inserted just under the skin of your chest wall,  under local anaesthetic.

This is a useful diagnostic tool when patients experience symptoms such as syncope , seizures, recurrent palpitations, light-headedness’, or dizziness regularly but not often enough to be captured by a 24-hour or 30-day external monitor. Implantable loop recorders have a long battery life (2 to 3 years) and so the heart can be monitored for an extended period.  For example, if you have a standard ECG to help figure out why you’re having fainting spells, it will only record any related heart rhythm abnormalities during the few minutes of the monitoring period — usually about five minutes. Because an implantable loop recorder monitors your heart signals for a much longer time, it’s more likely to capture what your heart is doing during your next fainting spell. This information may help your doctor make a definite diagnosis and develop a treatment plan.